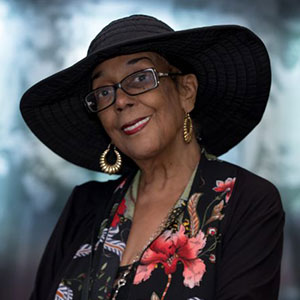 Mrs. Stone is a graduate of Fisk University in Nashville, Tennessee.

Mrs. Stone takes her place in history at 21 years old for refusing to give up her seat and move to the Jim Crow section of a public train in 1955, while traveling home for the holidays from Nashville to Houston. She did not know at the time that Rosa Parks had refused to give up her seat on a city bus in Montgomery, Alabama. Most people have heard of Rosa Parks, but not many know of Gertrudejane Holliday Stone. She was honored in 2020 by the President of the United States at the White House, regarding Black History and most recently, by Kelly Clarkston and Pilot Pens for her bravery in the face of bigotry.

Mrs. Stone taught in the Houston Independent School District for about ten years before her retirement. She has been a trailblazer in Pennsylvania as the first black salesperson in the department stores. As well, the first black to chair the Houston Public Library Board, appointed by Mayor Fred Hoftheinz. She has received many honors for her bravery and volunteer services that include: Beautiful Activist Award by Brandeis University, The Savvy Award and Papal Invitation Lady of The Equestrian Order of the Holy Sepulcher of Jerusalem, which is the highest honor bestowed upon a Catholic layman.

Mrs. Stone serves and has served the community on many boards and foundations, including Board Member of St. Elizabeth Hospital of Houston Foundation, founded by her husband Dr. John S. Stone, the United Fund Chairman Agency Operations Committee, Advisory Board Alley Theatre, Executive Board Member of Houston Chapter of Jack and Jill of America, Inc., member of St. Mary’s Catholic Church Liturgical Staff, Organizer of Seven Foreign Enrichment tours for teens, First Black Chairman of the Houston Public Library Board, Co-Founder of St. Mary’s Catholic Church Federal Credit Union, and Board Member of Emancipation Park Conservancy.