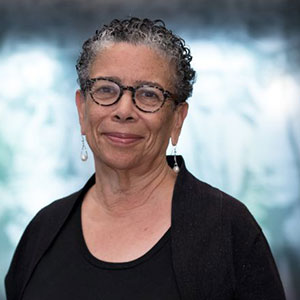 An outstanding scholar in the field of African, African American, and Modern and Contemporary art, Dr. Alvia J. Wardlaw grew up in Houston, Texas where she attended Jack Yates High School.  She graduated with an A.B. degree in art history from Wellesley College in 1969.  She then attended the Institute of Fine Arts at New York University where she received the M.A. in art history with an emphasis on African American art.  While in New York, Wardlaw worked at the Museum of Natural History and completed an internship at the Studio Museum in Harlem.  She began her teaching career at Texas Southern University in 1972 as an art historian in the Department of Art.  Concurrently, she began to work at the Museum of Fine Arts, Houston where she served as Curator of Education, Curator of African Art, and Curator of Modern and Contemporary Art for twenty-two years.  Wardlaw became the first African American to receive the Ph.D. in Art history from the University of Texas at Austin in 1996.  Her dissertation on the art of artist John Biggers became the basis for a major retrospective on Biggers organized by the Museum of Fine Arts, Houston and curated by Dr. Wardlaw.  The exhibition which examined the impact of Africa on the art of Biggers traveled to six cities in the United States including Milwaukee, Wisconsin; Richmond, Virginia; and Boston, Massachusetts.  Wardlaw received major awards for this and other exhibitions which she has curated including The Quilts of Gee’s Bend ; Our New Day Begun: African American Artists Entering the New Millennium;  Something All Our Own: The Grant Hill Collection of African American Art, and Thornton Dial in the 21st Century.  In 2010, Wardlaw was awarded the Wellesley College Alumnae Achievement Award, the highest honor bestowed by her alma mater to an alumna, for her outstanding contributions to the field of American art.

Dr. Wardlaw is a second generation professor at Texas Southern University.   Her father, Professor Alvin Wardlaw, was chair of the Mathematics Department and then served as Budget Director of the university for sixty-three years.  As Professor of Art History in the Department of Visual and Performing Arts, Dr. Wardlaw has mentored countless art majors, helping them to secure positions and internships at such institutions as the Cleveland Museum of Art; the Museum of Fine Arts, Houston; the Mellon Foundation; the University of Dar Es Salaam, Tanzania; the Orange Show Foundation, Houston; and Southern University at New Orleans.  As Director/Curator of the University Museum at Texas Southern University, Wardlaw has organized over forty exhibitions at the museum including the acclaimed exhibition Traces of Confucius where she and the museum staff collaborated with the Texas Southern University Confucius Institute to bring the exhibition to Houston from the University of Maryland.  She was instrumental in developing community programming for the exhibition including a concert of traditional Chinese and African American music as well as a Family Day where children and their parents learned the Chinese language, practiced calligraphy, experienced a Tai Chi demonstration and played traditional games of China.  This program was repeated recently at the museum for the Confucius Institute Day on campus.   Dr. Wardlaw is working closely with the National Museum of Tanzania to bring art and artifacts from that country to the University Museum.  She looks forward to learning more of the rich visual arts culture of China and plans to continue the initiative of the University Museum of bringing an awareness of the legacy of the arts in world cultures through important exhibitions presented at Texas Southern University.