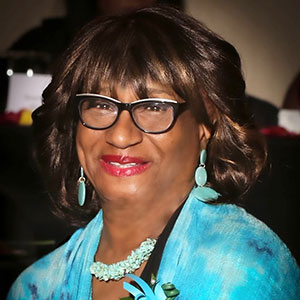 Mrs. Ellis Robinson received her Bachelor of Arts in Speech Communication and Political Science and from Master of Arts, Political Science/Public Administration from the University of Illinois, and her Doctoral in Urban Planning and Environmental Policy from Texas Southern University.

Mrs. Ellis Robinson help found the Friends of Emancipation Park (now Emancipation Park Conservancy) along with Bill Milligan and several others, established the board and engaged the city to revitalize the park from the ground up with new architect, design and programing along with husband Lonal, son, Lonal X. and daughter, Dorcaus, a 33.6 million project.

Mrs. Ellis Robinson founded Freedmen's Town Preservation Coalition (FTPC), a group of volunteers who seek to save the historic bricks in Freedmen's Town. These bricks were paid for and placed by freedmen and their descendants in 1914 and 1922 in an effort to improve their neighborhood. Today FTPC is seeking to save them from destruction by the City of Houston. FTPC is making the effort under the National Historic Preservation Act.

She is the president of Houston League of Business and Professional Women, an organization and program that advances the membership and work with youth ages 12-18.

Mrs. Ellis Robinson has won over 60 awards and honors for community and business service work, including “Points of Light” award from President George W. Bush and 20th Anniversary of the Presidential Volunteer Core honoree by President Barack Obama. She also served as the Democratic Party Precinct Chairman and on the Urban Planning and Environmental Advisory Board.