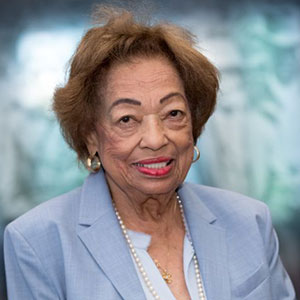 Drucie R. Chase (In Memory of)

Mrs. Chase served on the Emancipation Park Conservancy Board since its inception in 2014, serving with great commitment, exceptional leadership, organizational proficiency, and a superior moral character that was loved and admired. Mrs. Chase, a distinguished community volunteer, was born in Austin Texas.  She graduated, at just 19 years old, with a Bachelor of Arts degree in English from Huston-Tillotson College in Austin. She taught in the public school systems of Austin and Houston, Texas, and was a devoted educator for many years.

She was married to John S. Chase, noted architect in the City of Houston, and they were longtime members of Antioch Missionary Baptist Church. After retiring from teaching, Mrs. Chase remained dedicated to raising her three children, while helping Mr. Chase grow his architect firm.

Mrs. Chase also served on the Board of the Houston Botanic Gardens, the Houston Museum of African American Culture and was a part of numerous organizations including the Houston Chapter of the Links Inc., Alpha Kappa Alpha Sorority (served as president), and The Moles (charter member).

Mrs. Chase firmly believed that Emancipation Park, because of its culture and history, has been and will continue to be a major asset to in the Greater Third Ward Area, and to the city of Houston.